Korean Peace Summit: a Meeting 65 Years in the Making

On April 27, Kim Jong-un became the first North Korean leader to cross the border into South Korea since 1953 in a historic peace summit with President Moon Jae-in. The summit was the result of months of talks between the Democratic People’s Republic of Korea and the Republic of Korea. It was highly organized and choreographed, filled with rich symbolism and history.

Having crossed the border into the South, Kim briefly broke scrip to invite Moon to cross into the North, saying: “As I walked over here, I thought ‘why was it so difficult to get here?’ The separating line wasn’t even that high to cross. It was too easy to walk over that line and it took us 11 years to get here. … Maybe this is the right time for you to enter North Korean territory.” Moon took him up on the offer, leaving Koreans on both sides stunned and elated.

After the fanfare died down, Kim, Moon, and their delegations sat down to discuss military diminution, denuclearization, and the possibility of a permanent peace agreement. After two hours of discussions, the two planted a tree using water and soil from the North and South before enjoying dinner together with their wives. 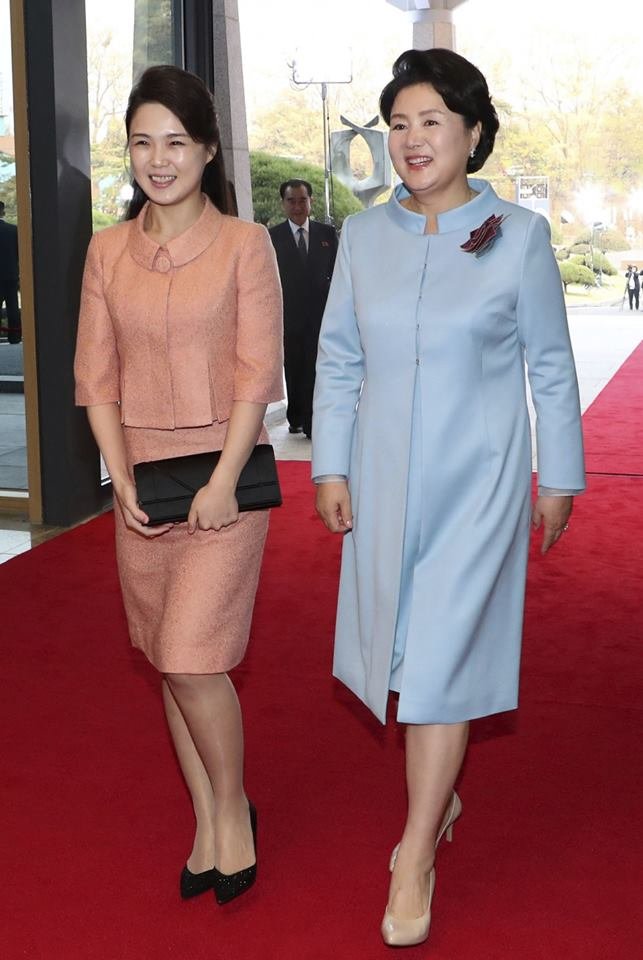 First Ladies Ri Sol-ju of the DPRK (left) and Kim Jung-sook of the RoK (right) arriving at the summit.

The summit has already bore fruit. Tensions have been significantly diminished. A Korea Research Center poll shows nearly 80% of South Koreans now trust Kim Jong-un and reunification is once again an important issue in the South. The DPRK has agreed to cease all nuclear tests and the RoK has agreed to cease their propaganda operations on the border. The agreement itself, The Panmunjom Declaration for Peace, Prosperity, and Unification of the Korean Peninsula, is a remarkable document. Named for the ‘Peace House’ at the border village of Panmunjom in which it was signed, it describes the division of Korea as a “Cold War relic” and lays out the plans for, among other things, permanently stationing two liaisons on the border from both sides to improve future communication and allowing the families torn apart by the division to reunite on August 15th of this year, the anniversary of Korea’s liberation from Japan. 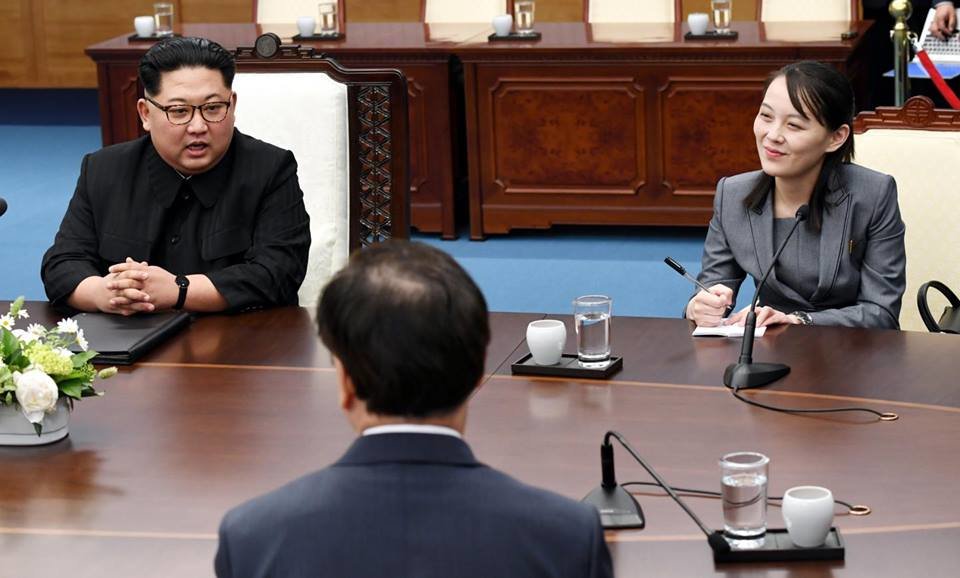 Director Kim Yo-jong, the only woman at the summit table, taking notes next to Chairman Kim Jong-un.

Many in the international community have already congratulated Korea on their success. In China, Foreign Ministry spokeswoman Hua Chunying said she “applauds” the two leaders’ courage. She also quoted a particularly poignant poem – “Disasters are never powerful enough to separate real brothers, and a smile is all they need to eliminate the hard feelings.” President Vladimir Putin told Moon Russia was ready to promote inter-Korean cooperation. The White House also praised the meeting.

However, many in the Western media have made the ahistorical and chauvinistic mistake of crediting President Donald Trump of all people for the summit. Vice President Mike Pence himself credited Trump entirely for the summit, citing the sanctions against North Korea as the reason for their willingness to sit down with South Korea. Some have even gone so far suggesting Trump be given a Nobel Peace Prize for his role in the peace agreement. So how much responsibility does Trump actually have for this?

None. For starters, the talks of shortages and starvation in the DPRK haven’t just been exaggerated, they’re entirely made up. There was a famine in the late 1990s following the fall of their biggest trade partner, the Soviet Union. But however devastating this was, the nation had recovered completely within five years and there hasn’t been a famine since. In the last twenty years, the economy has only grown.

Since the country no longer publishes their economic statistics, the most reliable source on their economy is generally considered to be the RoK’s central bank, the Bank of Korea. They estimate that the DPRK economy has grown at a rate of about 2% every year since 1998 with no visible effect from sanctions. In fact, their economy had a massive leap in 2006 and 2007 immediately after another round of international sanctions were imposed on them. And though China has publically stated they are abiding by the UN sanctions, many Chinese ships have been caught illegally trading with Korea. Though the scale of this illegal trade is unknown, what is known is that DPRK’s planned economy is infinitely more stable than previously assumed. Sanctions or no sanctions, they’re doing just fine.

And now, a history lesson

The DPRK has been open to discussing peace for years. Its the US, Japan, and the RoK’s corrupt and anti-democratic leaders who have been turning down peace talks and even taunting the DPRK. Korea wouldn’t even have remained divided this long if US-installed dictator Syngman Rhee didn’t massacre more than 100,000 communist and democratic activists, all of whom supported unification under the democratically elected Kim Il-sung all the way back in 1950. And the RoK’s last president, Park Geun-hye, was too busy siphoning money to her bizarre religious cult to give much thought to reunification.

Though Moon has been more willing to talk than his predecessors, he had already green lit the joint US-South Korean war games, a months long simulated invasion of the DPRK which ends with the decapitation of an effigy of Kim Jong-un, in March, barely a month before the peace summit.

If anyone deserves a Nobel Peace Prize it’s the late Kim Il-sung, Kim Jong-un, or Kim Yo-jong. (Though its not like the Nobel Peace Prize means anything anymore.) The recent peace summit was the culmination of a 65 year long plan that began when the Korean Armistice Agreement was signed in 1953.

It’s important to first note that the Korean War was not an attempt at conquering territory. It began in response to US-installed dictator Syngman Rhee’s massacre of communists, democratic activists, and pro-reunification forces in the South. The Korean People’s Army pushed into South Korea and were assisted by local anti-fascist and anti-imperialist guerrillas, as well as mutineers in the South Korean army. It was not until US troops invaded that the South was put back under Rhee’s control (though he and his fascist clique would later be overthrown). After the failure of the Korean War, President Kim Il-sung set his sights on peaceful reunification (and, of course, rebuilding the country, which had been leveled by American bombing campaigns and lost 20% of its population, as did the RoK). He outlined out three conditions for peaceful unification:

Kim Jong-il unfortunately was forced to focus on self-defense and military build up due to pressure from the US, Japan, and their lackeys in the RoK. He began pursuing Songun politics (English: military first) as the rest of the region militarized.

However, the peace process was restarted by Kim Jong-un who took up the banner of Songun politics but shifted the focus towards peace and negotiation. By completing the nuclear program, he ensured that the DPRK would not become the next Iraq or Libya and gave the nation some leverage. He put pressure on the RoK to pursue peace regardless of what the US or Japan wanted and made Korean reunification and US military presence a major issue again in the South.

Moreover, the summit would not have been possible without the work of Kim Yo-jong. She’s something of a rising star in North Korean politics and became hugely popular in South Korea after her appearance at the 2018 Winter Olympics. She was instrumental in getting Kim and Moon together, having personally delivered letters back and forth between the two and meeting diplomats in South Korea many times in the months leading up to the summit.

Indeed, the summit was the first step in realizing Kim Il-sung’s vision of peaceful independent reunification.

No matter who takes credit for it, history will prove that Korean reunification is a Korean matter to be settled by the Korean people. The “new history” of peace the two leaders have ushered in at this summit should be welcomed by all peace loving peoples of the world; and we have only Kim Il-sung, Kim Jong-un, Kim Yo-jong, and Moon Jae-in to thank for it.

Liberals Need to Get Real on Russiagate