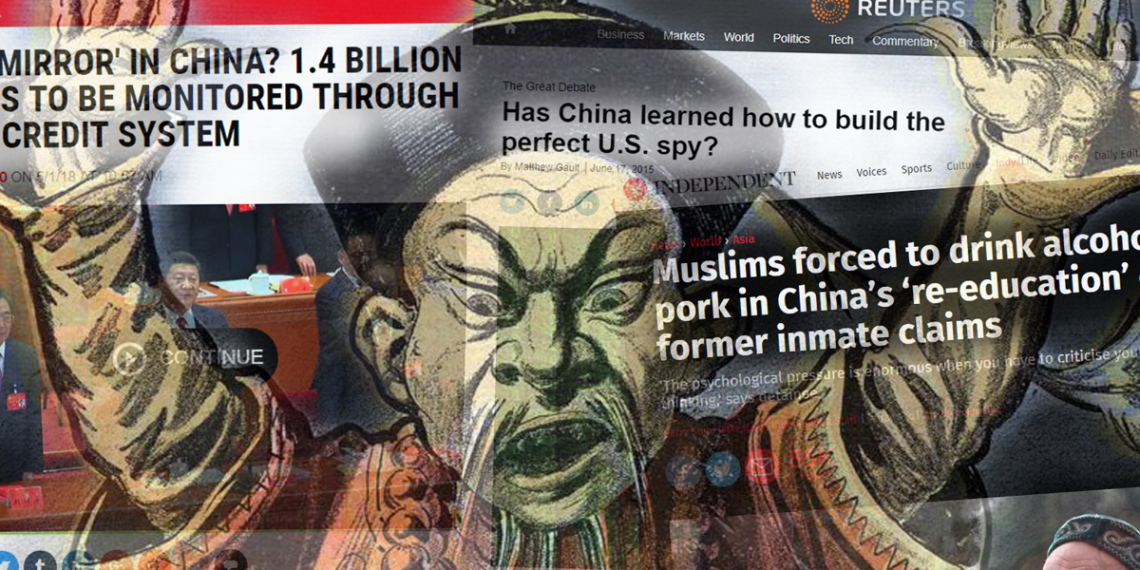 The outpour of completely baseless, biased, and unresearched horror stories is astonishing. Tales of aggressive military expansion, neocolonialism, torture, human rights violations, and massive unrestrained surveillance systems have made headlines again and again. Besides the obvious hypocrisy of decrying the very same things these companies praise Western countries for doing, what’s most concerning about these stories is their glaring inaccuracies. To help unmask Sinophobia and propaganda in the media, let’s take a closer look at some stories which have made headlines recently.

China’s social credit system, unveiled June 14, 2014, has made a lot of headlines recently as the government moves to implement it in its entirety across the whole country. Thousands of articles have been written comparing the system to Black Mirror and 1984, crying over Chinese citizens with bad social credit having been denied access to schools and transit. And, indeed, these half-truths sound horrifying and tyrannical. What is left out, however, is that social credit is determined exclusively by a citizen’s business practices.

Unlike in the US where unethical companies like Bain Capital are allowed to buy, gut, and ruin companies before declaring bankruptcy for profit, in China, bad business is punished. Hou Yunchun, former deputy director of the development research center of the State Council, writes: “If we don’t increase the cost of being discredited, we are encouraging discredited people to keep at it.”

Further, discredited people have full and equal access to all public services, including public schools and public transit. They can only be barred from using luxury travel options such as first-class flight and access to private schooling. Moreover, Zhi Zhenfeng, a legal expert at the Chinese Academy of Social Sciences, assures us that: “How the person is restricted in terms of public services or business opportunities should be in accordance with how and to what extent he or she lost his credibility.” Minor offenses only yield minor punishments, major offenses, major punishments. “Discredited people deserve legal consequences,” Zhi continued. “This is definitely a step in the right direction to building a society with credibility.”

Companies known to be in violation of the law and ethical business practices have also been publically exposed by the government. This is all part of China’s ongoing anti-corruption campaign.

Omir Bekali, an Uighur, a minority from the autonomous region Xinjiang, made headlines across the world after he came out with a shocking and bizarre story of hellish re-education camps where Muslims were allegedly forced to drink alcohol and eat pork. He claims also to have been shackled and beaten. His account is brutal and depicts a world of harassment, religious and ethnic discrimination, and slightly milder torture than the methods used on prisoners at Guantanamo Bay. His vivid and emotional account would likely inspire real international outrage if even a single person reported anything remotely similar.

The story is nonsense. He claims that many been kidnapped, tortured, and forced to violate Islamic code of conduct and yet not one person besides Mr. Bekali has reported so much as Islamophobic harassment by Chinese authorities in Xinjiang, or anywhere else for that matter.

Xinjiang is home to the East Turkestan Islamic Movement, a violent separatist group of religious extremists who have killed over 100 in multiple terror attacks across the region. Uighur Islamic extremists have been found among the ranks of ISIS and have vowed to “make [Chinese] blood flow in rivers, by the will of God.” These extremists claim to be oppressed by the Chinese government despite enjoying regional autonomy, receiving significant developmental aid from Beijing, and China’s ongoing policy to promote religious freedom and harmony. In China, freedom of religion is protected in the constitution, anti-Islamic content was recently banned in social media, and Islam is experiencing a revival.

Bekali’s account is completely without foundation in reality. He directly contradicts himself in other interviews, like this one from the Daily Mail. The account here is even more outlandish and tells of farcical chanting and hourly oaths of loyalty to the Communist Party. He puts ol’ Joe McCarthy himself to shame with his overuse of tired, Cold War era anti-communist cliches. The entire story, which was largely reported on, seems to be wholly false.

What is true is that Xinjiang’s GDP has grown steadily at a rate far exceeding the national average and Uighur members of the Communist Party have expressed the growing desire for unity between Xinjiang and China, as well as among the regions many ethnicities and religions.

This racist, rambling tirade by News.com Australia’s Jamie Seidel is perhaps the most egregiously Orientalist thing I’ve ever read. When talking about the amendment to the Chinese constitution which abolished term limits, he sarcastically writes: “The glory of [the] Middle Kingdom will be restored again.” He also describes Xi Jinping as an emperor and makes countless references to imperial China (or, rather, his image of imperial China which is basically just an amalgam of various Asian stereotypes). This is Orientalism. Rather than writing about this modern nation as a modern nation, Seidel prefers to crack jokes and reduce China to an inaccurate and racist caricature.

This same Orientalism is mirrored in articles like those by the BBC and CNN, among others, which talk of “heirs” and “emperors”; and is especially evident in the constant reference to the DPR of Korea as “the hermit kingdom.”

The reality is that China has democratized. Term limits were added to the constitution after the chairmanship of Deng Xiaoping to ensure that efforts would not stagnate or stall during the period of economic reform. It ensured that China’s leadership would be focused on the present conditions, rather than future elections. With the reforms having proven an objective success, and China’s efforts now focusing on the move towards socialism, there is no longer a need for such an undemocratic and arbitrary amendment. There will still be elections and Xi Jinping still is not guaranteed a third term. Plenty of Western leaders have been serving for a lot longer with a lot less support, such as German Chancellor Angela Merkel who is currently in her fourth consecutive term.

“Eight countries in danger of falling into China’s debt trap”

Chinese influence overseas has been questioned again and again, often by the same people who consistently support Western military adventures overseas. The above article by Quartz laments the plights of Djibouti, Kyrgyzstan, Laos, the Maldives, Mongolia, Montenegro, Pakistan, and Tajikistan. What a tragedy it is that they must be subjected to infrastructure and factories.

It is a testament to Quartz reporter Tim Fernholz’s shamelessness and hypocrisy that he readily admits that the US’ largest military base in Africa is in Djibouti, one of the countries supposedly at risk of falling into Chinese “imperialism.” He literally says this in the same sentence which attacks Chinese involvement in the nation. Only an aggressively ignorant Western chauvinist could write that Chinese airports are a threat but US soldiers aren’t.

One can only imagine the indignation Fernholz would feel if China began “waging a massive shadow war” in Africa like the US has been doing. One has to ask, is Fernholz aware of this? Is the great reporter aware of the colonial taxes France continues to impose on the African nations they once directly colonized? Why, Mr. Fernholz, are roads, schools, power plants, aid programs, and debt forgiveness the big danger?

These are just a handful of the mass of vitriolic propaganda aimed at China. And that’s just from private companies. The US Embassy in China claimed to have been the target of “sonic attacks.” These unexplained science fiction weapons China’s supposedly using against Americans sound eerily similar to those the US Embassy claimed to have been attacked within Cuba which were determined to be completely made up.

So why the lies and the slander? Why all the hate? Perhaps they’re overcompensating. China’s president, Xi Jinping, is undoubtedly one of the most brilliant statesmen of the 21st century. And over 80% of Chinese polled said they supported him, had faith in their government, and were optimistic about their country’s future.

By contrast, optimism has been severely lacking across Europe, Canada, Australia, and the United States. The crisis of confidence in the United Kingdom resulted in one of the longest hung parliaments in British history, with the hugely unpopular Theresa May just barely clinging onto her majority. Even the monarchy is becoming increasingly unpopular. Two-thirds of the population said they didn’t care about the Royal Wedding, a huge decline since the last one. “Fuck the Royals” parties were held in pubs across the country. In Spain, when large portions of the population aren’t trying to secede, the government is struggling to deal with a growing labor movement which held mass protests this May Day. In France, the May Day protesters were decidedly more hardcore, clashing with riot police. And when protesters aren’t setting cops on fire, they’re burning effigies of President Emmanuel Macron in protest against his hugely unpopular economic reforms which resulted in the loss of over 120,000 jobs. Justin Trudeau can’t stop embarrassing himself every time he steps outside of Canada. Malcolm Turnbull is struggling to justify his ministership. And I don’t think I even have to mention how much people hate Donald Trump both inside and out of the US.

I mean just look at these idiots…

The truth is, they’re afraid.

China has beaten the West at its own game. The emerging superpower has outpaced and outdone them. They have a larger, more educated workforce, a more robust economy built on actually producing things, and a plan for the future. The West doesn’t seem to have a plan for the present. As China marches toward the horizon, united and prosperous, Western leadership seems entirely unable to get things together as their people find themselves unable to afford basic necessities like food and rent.